Think I may have found my guitar pick

I have the hardest time understanding how so many people get along with those treble killing Tortex picks? I guess it’s something to do with the way I hold the pick but I almost never drop one so that doesn’t factor into my pick choice.


My go to is Ultex Jazz iii for most things. They are truly indestructible. Pick scrapes and slides do nothing to them. I’ve been using the same pick since 2015 with almost no visible wear. Incredible.

I like the Herco for acoustic or Dunlop Nylon. 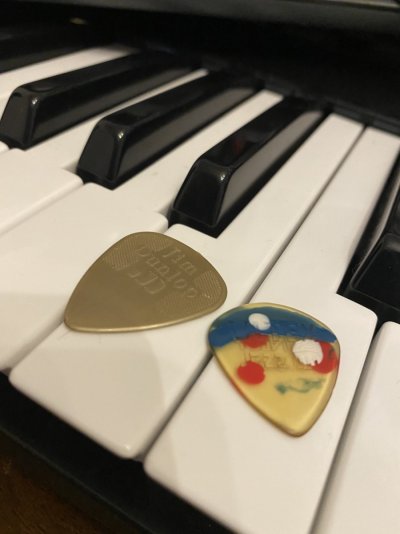 On the right is what an Ultex looks like after 7 years of use. I know how old it is because I painted it with nail polish so I could find it on carpet or a dark stage.
The other is a nice nylon gauge Dunlop 40th Anniversary…just liked the color really

I use my fingers. I don’t have to worry about dropping them, or wearing the tips off. They’re neither too flexible nor stiff. I don’t have to chase them down at GC and I don’t have to wait for delivery. The same picks work for jazz, country, folk, and anything else I want to play. And they work equally well with a fork or chop sticks. 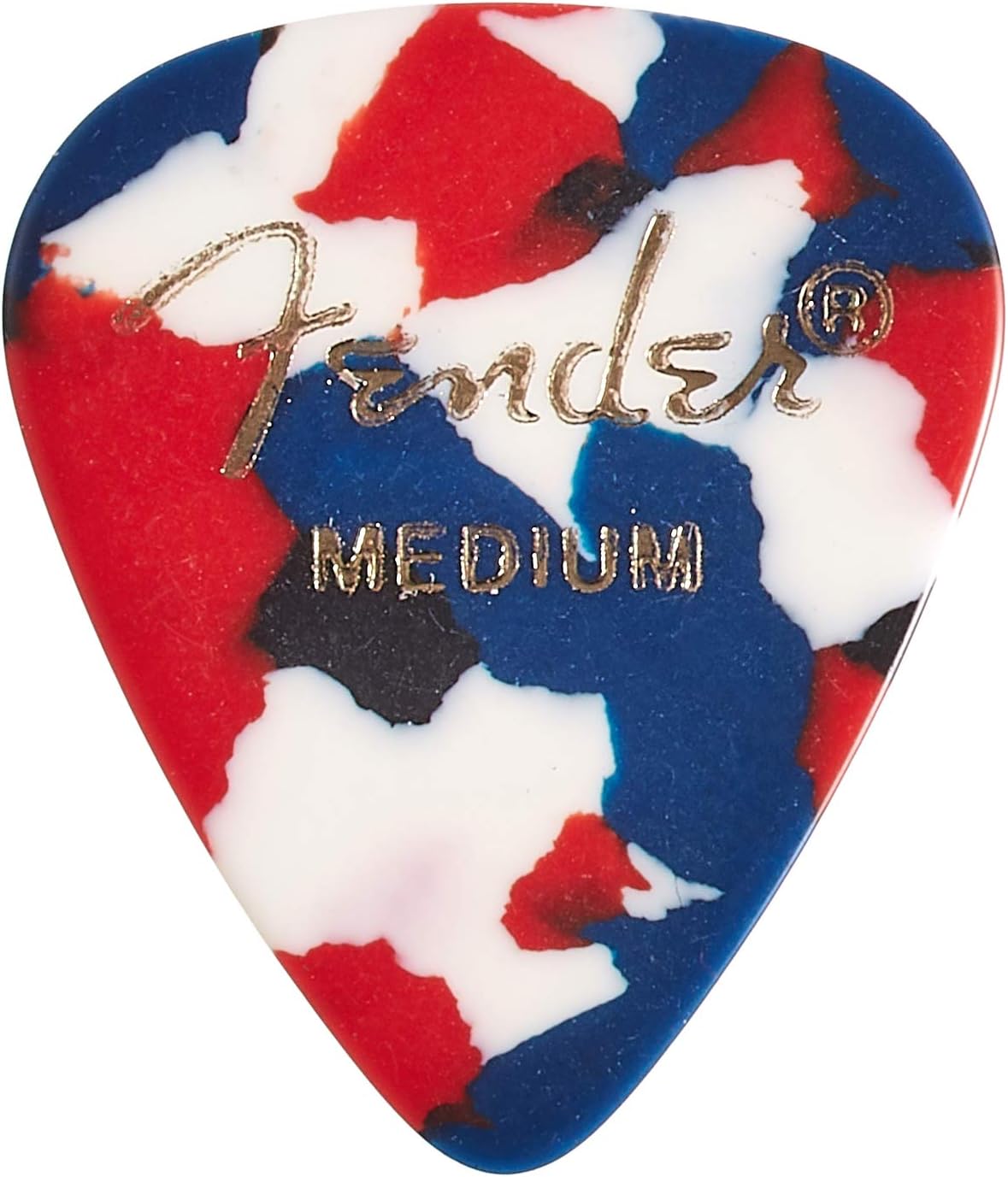 I like Guitar Moose Sticky Grip, .80 mm (heavy). I also have some of their sticky dots, which are stick-on self-adhesive patches that will add a nice grip effect to any pick.

I dropped mine on the carpet and still haven’t found it. 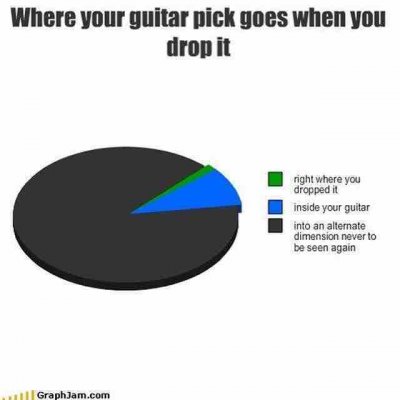 calebaaron666 said:
Mine was in the dryer.
Click to expand...

My dog ate mine, I didn't want it back when I found it.

I started using Herco 50s about 5 years ago after watching an interview with Tom Johnston of the Doobie Brothers. I happened to be near my local Guitar Center, found a pack on their 'pick wall' and have been using them ever since.

I just got my Herco vintage 66 picks and, man, do they kill the treble.
It's the pick Billy Duffy uses on his Falcon, and he uses it sideways. I tried them that way, and, yeah, you get more of a thicker rock sound. 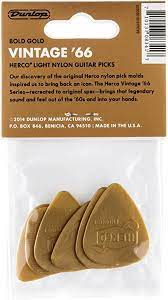 I'll be sticking with my Fender 351s. They don't kill treble. In fact, if you grind them down to a sharp point, the treble really becomes bright as hell. 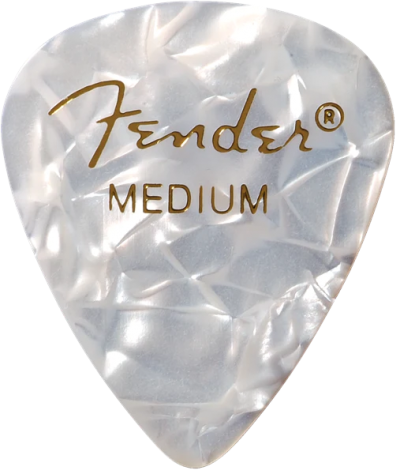 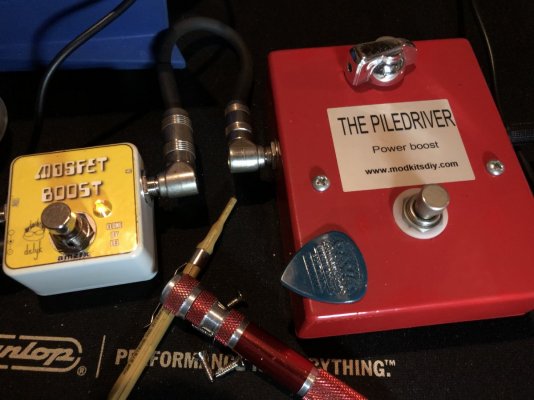 My pick journey started with Fender Mediums, and then went to Stubbies (3mm?)

I discovered the Gravity Picks Razer Standard in 2mm and settled in. I thought. Sharp point, right size, perfect. But they're translucent blue and were about $5 each and I was really afraid I'd be losing them.

Along comes Rob Chapman (and I'm not a fan), and HE waltzes into Gravity Picks' office (garage) and comes away with a signature pick (as Rob do) and it happens to be the Razer Standard in 2mm, but HE gets them in a smoke-grey color with a couple of custom features AND his signature etched into the face of the pick. And since they're the same price as the ones I order, I decided to try them. I like the color better and his signature etching actually aids in pick retention.

Not quite done yet. Gravity debuts a "Gold" pick. It wasn't gold color, but sort of cream color, and made out of some exotic material that doesn't do that "CLACK" thing on the strings. Nice! And available in my now-favorite shape (Razer Standard). But, like $25 a pick. What the actual Flock? I tried one and loved it, but I have to put it back in the safe at night.

And then (heavenly music stab) along comes Amazon and it turned out that Gravity made these "Gold" picks available in packs of a dozen in several different colors (including an easy to find "seafoam" blue-green) for only $70, which drops them to $5.83 per pick. But it got better. If you were one of the first, I dunno, several hundred to order up, you got them for half price. $35 for a dozen. SNATCH! I'm still not losing them and they still return to the Vault when I'm done, but it's pretty much a perfect pick (for me). 1.5mm thick, sharp point, almost no string click and it feels like (the cork is getting closer to my nose) the volume is up a bit. Okay, so settled in on those for now. 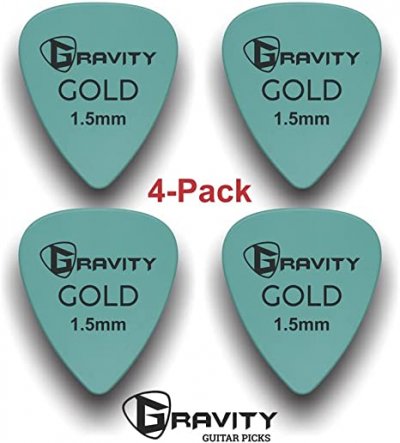 But wait -- what about my drunken, pick-thieving friends? I've already got the cheapest guitars on the planet to put out when one fo them wants to play air guitar on the real thing. Enter Pick Punch (dot com), a gizmo that will stamp out a half-dozen picks from your old credit cards (unless, of course, you have the Apple Titanium card, which is made from real titanium). Sand down the edges a bit and you have...a Fender Medium. Seriously. I now have several thousand Pick Punch picks that I can casually leave in dishes here and there for the Idiot Influx.

And that's my pick story.

Horse Nation said:
I just got my Herco vintage 66 picks and, man, do they kill the treble.
It's the pick Billy Duffy uses on his Falcon, and he uses it sideways. I tried them that way, and, yeah, you get more of a thicker rock sound.


I'll be sticking with my Fender 351s. They don't kill treble. In fact, if you grind them down to a sharp point, the treble really becomes bright as hell.

I got a bag of Fender picks as case candy with my CS ‘69. It’s still in the case.

Emergence said:
I got a bag of Fender picks as case candy with my CS ‘69. It’s still in the case.
Click to expand...

Remember the days when Fender would give you that brown/yellow/black strap as case candy. I swear if you watch any videos of bands from the '70s and '80s and '90s, you are guaranteed to see someone using this strap. Hands down the most ubiquitous strap out there.

Remember the days when Fender would give you that brown/yellow/black strap as case candy. I swear if you watch any videos of bands from the '70s and '80s and '90s, you are guaranteed to see someone using this strap. Hands down the most ubiquitous strap out there. 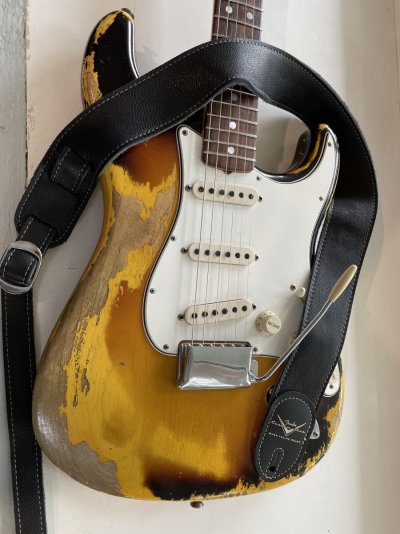 This beautiful leather strap came with the guitar. I should have shoes so soft. It has a non slip sueded back. I haven’t used the strap either. I play seated.
Last edited: Jun 22, 2022

Honey Picks. Oddball shape. Had to try one (in 2mm) Logo is grippy and the shape really works for how I hold picks. Plus 3 usable sides. $20 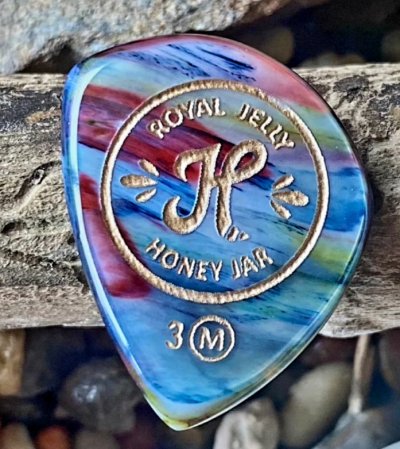 I like ‘em pretty fat. These days my fav is Dunlop John Petrucci Flow 2.0 mm. That’s for electric. For acoustic I’ve been experimenting again lately. 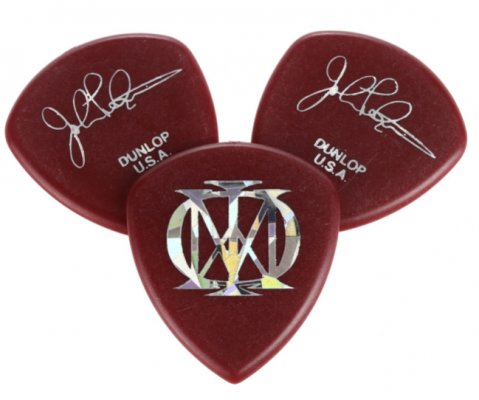 For me it isn’t just about thickness, like I once thought, it is also about flexibility string attack and the feel of the luck on the string. I had one that felt like a ruff finger on a piece of paper which to me is worse than finger nails on a chalk board. that pick didn’t get used for more than a minute before it got sidelined! Every pick at the top of my list has the combination of stiffness and feel with thickness no longer being that important than I go for tone. Each sounds the same to my wife but for me there are subtleties that each has and I may pick in for those subtleties at the current time to switch to a different one a bit later. I have three picks with my mandolins and three with my guitars for these reason. Maybe I Tend to over think some things but I always want to know why.

I pick up free picks whenever I can, and use them at random when I practice, just to see what changes and new sounds show up. If I find one I like I’ll stick with it for a while, but I’m not OC about any of them. I will say one of my faves on my Rose is a thick pick endorsed by Dave Grisman for mandolin and with his Dawg signature. It’s got a good thickness and just overall good feel and sound for me.
For acoustic I like a lighter, thinner pick. The freebees from GC work fine and I don’t care if I lose one.
You must log in or register to reply here.
Share:
Reddit Pinterest Tumblr WhatsApp Email Share Link