Has anyone put on one of these: http://www.zeroglide.com/ I am seriously thinking of doing it since the nut on my Double Jet is a little high for my tastes.

I'm gonna get that done to my G Love Corvette too!

drrohle said:
Has anyone put on one of these: http://www.zeroglide.com/ I am seriously thinking of doing it since the nut on my Double Jet is a little high for my tastes.
Click to expand...

I just realized, all five of my Gretsches now have zero frets. I couldn't be happier.

Excellent! Now if I can just work up the courage to slice through my nicely finished bindings to remove the old nut!

all you need is patience, a sharp blade, a screwdriver with a thick tip, and a hammer......

The Marlin said:
all you need is patience, a sharp blade, a screwdriver with a thick tip, and a hammer......
Click to expand...

Got 'em all. Just need the nerve to hammer around on my NEW guitar!

Rural Victoria. The LAN Down Under

drrohle said:
Has anyone put on one of these: http://www.zeroglide.com/ I am seriously thinking of doing it since the nut on my Double Jet is a little high for my tastes.
Click to expand...

Axis39 said:
I use 10's on both my Gretsches. Both have Bigsbys, one is an import model.

I have a roller TOM style bridge on the import and it's worked well for seven years or so.... Although, I think it's finally developing a rattle. I don't know if it sucks tone, but if know the Bigsby is smoother with it there. I am also less worried about strings breaking.

I have a Space Control on the other....


As soon as money gets better I'll be chasing down a pair of Comptons...
Click to expand...

Rollers are logically better to avoid classic the tune-O-matic, knife edge string cutters every time I go to use the Bigsby.

GretFret54 said:
Rollers are logically better to avoid classic the tune-O-matic, knife edge string cutters every time I go to use the Bigsby.
Click to expand...

Whoa.... Poughkeepsie?!? OMG, small world!!
@GretFret54 -- I grew up a little east of Poughkeepsie, in the small town of LaGrangeville back in the early 60's & 70's! My dad was a senior electronics engineer at IBM and retired in 1977. I still have family scattered around upstate NY and countless friends as well.

Just my opinion.... I think there is a lot of old stigma that still follows Zero Frets (from 60's cheapo MIJ guitars) and cheap Roller Bridges.
I don't personally have a guitar with a zero fret, but fellow guitarists that have them seem to like them, and I agree of those I've actually played!
As far as the roller bridges, A good designed roller bridge with tight tolerances will be much better than the cheapies from China. I personally have tried the Wilkinson roller bridge and it has mass, and the rollers on them (the only moving part) have way less potential for rattle than the intonation screws on most other adjustable bridges... roller bridges included! As for the "Tone Suck" image, ill-fitting bridge bases and parts will make any bridge a tone-suck candidate! You really have to try your particular situation and evaluate how well your overall hardware performs together
You may have seen my posts in other threads, so I apologize, but it bears worth mentioning. I have a 5120 Electromatic and a 5435 Electromatic ProJet (the bad angle bridge design), and in both cases the Wilkinson Roller Bridge served well by having the ability to adjust intonation, and also improved the sustain, tone and performance of each guitar! Sometimes you can't just swap parts (just drop in) without making sure everything fits perfect with the rest of the parts.


#1) The 5120 with roller bridge... I also took extra time to align the thumbwheel studs, make sure the bridge mounts freely on the studs, and correctly contour the wooden bridge base by sanding to match the contour of the guitar top. Also, I milled the ends on the underside of the bridge so they are notched aprox. 0.120" deep & I had a more lowered range for adjusting bridge height. It was optional, but I chose to do so because it was almost bottomed out on this guitar. That is dictated by the set neck angle of your particular guitar. 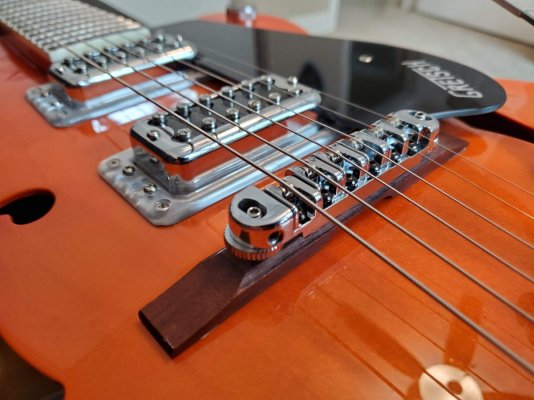 #2) The 5435 Pro Jet with roller bridge... In this case, this was pretty much a drop in replacement. But I filed the holes slightly because it was slightly snug. Point being, if it can't slide freely up or down when adjusting the thumbwheels, you won't be insured it is fully resting on the thumbwheels, therefore loosing tone by insufficent contact & pressure. This one didn't need the knotched bridge because it wasn't bottomed out... but it was close.
I originally did the Bigsfixx roller on the Bigsby first... the stability was better, but still not quite there... but then adding the roller bridge is what nailed it. Oh yeah, did I mention it also corrected the bridge angle? 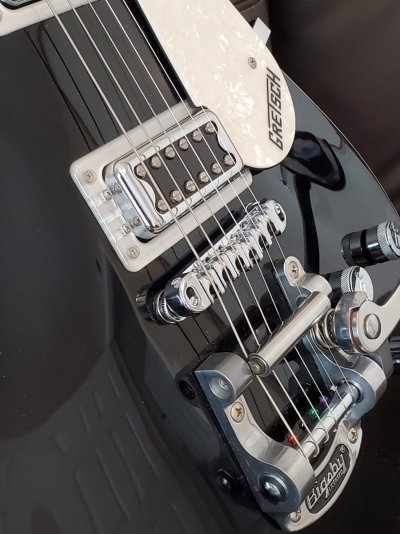 I have transformed the unstable Bigsby tuning and (to my ears) richened the tone of a 5226t with a very solid and not-a-chance-of-a-rattle ABM roller bridge and a String Butler... addressing stiction at nut and bridge.
You must log in or register to reply here.
Share:
Reddit Pinterest Tumblr WhatsApp Email Share Link