Yep, yesterday morning before the sun came up. The sheriff and I never found the deer. Could t even tell quite where it was hit. But it did a number on my company car. I was down to 40mph so I’m good before anyone asks! 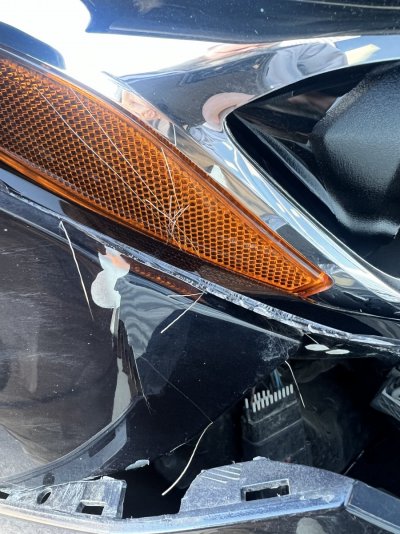 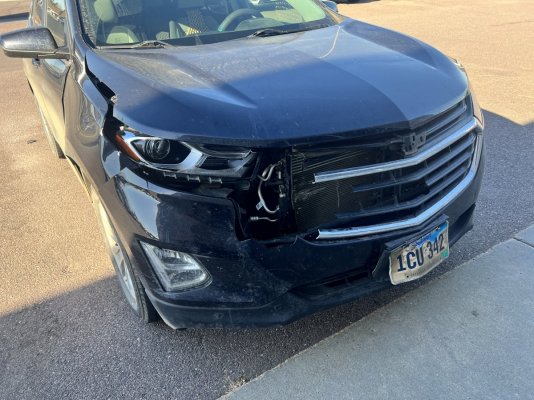 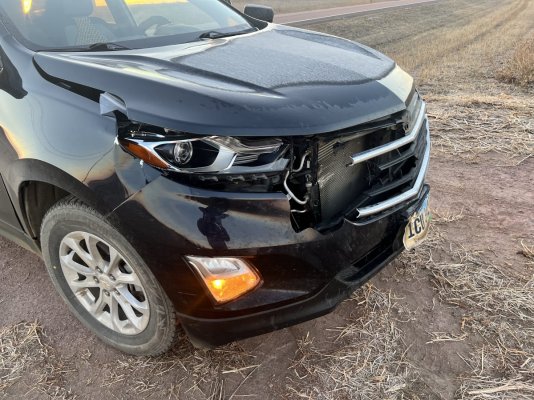 I’m good no damage to me at all. But yes 40mph busts up all the vehicles plastics and bent some of the metal a bit and dented the radiator badly. I hit one at speed once, The car was un-driveable

At least it wasn't a moose. Due to their height, they usually land on top of the car, often going thru the windshield. Usually, the car gets totaled.

My wife worked in the office of a factory that had a lot of hunters employed. A tiny lady she worked with was talking to some of the hunters and mentioned that she bagged a deer herself a couple of weeks earlier.
"What did you use? Bow? Shotgun"" they asked her.
"Buick." she replied.

Glad you're OK. Company car is covered by insurance, so you're off the hook, especially since you were likely under the speed limit. Dawn and twilight in fall are bad times for deer and cars.

Our friends' grown son totaled a Ford Explorer several years ago when he swerved to avoid hitting a deer and collided with a very large oak tree at about 40 mph. Luckily, all but the vehicle survived unhurt. The young man received one universal bit of advice from everyone, including the first responders: "Next time, hit the deer".

I've seen worse in 30 yrs at Animal Control . Air bags deployed too . Moose are worse ( we don't have moose near me ) but what happens is more people are killed by moose than moose are killed by people / car accidents . A moose body / under belly , starts at about where your windshield meets your dashboard due to their long legs Depending on your speed , the moose can actually go right into the cars seating area .

Glad you are ok.

thunder58 said:
I've seen worse in 30 yrs at Animal Control . Air bags deployed too . Moose are worse ( we don't have moose near me ) but what happens is more people are killed by moose than moose are killed by people / car accidents . A moose body / under belly , starts at about where your windshield meets your dashboard due to their long legs Depending on your speed , the moose can actually go right into the cars seating area .
Click to expand...

I had a black bear wander in front of me once on the back side of lake arrowhead. I would take the back roads down to Hesperia and Victorville. Not a massive huge animal but big enough I really didn’t want to hit it. That back road is a pretty slow road with some cool hairpin turns I always over drove but still had time to actually stop!

Living in the Midwest, it's never a matter of "if" but more a matter of "when" you hit a deer. A deer hit us while my wife was driving home from Costco a couple of years ago. She was on her way to 55 mph but it totaled our van. Some friends of ours down in Missouri hit one that may have won the gold medal. They live in the deep part of the Ozarks in the Mark Twain National Forest -- back-to-the-landers from the 70's exodus. It was raining and a mid-sized doe jumped out in front of them as they were driving down the forest service road. It came through the windshield and landed in the back seat dead lying on its side. Kicked the driver in the head on its way back but never even touched the windshield wipers. They had to take him to the hospital to pick the glass out of his head but at least he didn't have to replace the wipers .

They called a neighbor who had the deer cleaned and butchered in their freezer by the time they returned home from the emergency room. Tough bunch out this way.

Yikes!
Glad you're OK B!

Glad you're okay - I've seen people get hurt from that.

Out here it’s a given, and when you drive around around 35000 miles a year something is bound to happen. I had a guy a couples ata ago tell me he has never hit a deer but he only drives around town.

I had a friend that drove a route in western Minnesota and eastern South Dakota, and hitting deer just seemed to happen all the time.

The saying around here is: ‘Watch for the deer’ is Midwestern for ‘I love you’

Believe it or not it’s more of an almost everyday occurrence where we live. To some it seems like a crazy big deal when generally it’s just a doggone it not again moment.

Driving up thru Central Oregon last night I was totally expecting to hit one. They’re migrating now, signs everywhere.