I have owned several modern made in Japan Gretsch guitars all of which pretty much came stock with TV Jones pickups. In the last few recent years other than select models Gretsch has reverted back to using more of their own in house pickups (the high sensitive filtertrons), in their guitars such as on the player editions.

I’m curious to how these compare to tvjones? Are they perfectly fine or would tv jones replacements be an upgrade? And how much of an upgrade?

I’m also curious if the high sensitive pickups are basically the same exact pickups Gretsch were using prior to tv jones’ relationship with Gretsch? I’m sure they aren’t the same as the first reissues of the 80’s and 90’s pre fender days, but I would think they would be the same as the post fender pre tv jones connection filtertrons? It seems unlikely that they would redesign a brand new filtertron from the ground up. More than likely they just renamed them high sensitive?

Just one last after thought. Tv jones is a small operation where they make allot of pickups as made to order. Could be they couldn’t keep up with the demand from Gretsch hence Gretsch using more of their own in house pickups? Just curious because for awhile I want to say all pro level Gretsch’s were shipping with tv jones filtertrons.

I had a players edition with high sensitives and currently have a rat rad rod I put a set into. Also have some pro lines and electromatics with tv Jones. I wouldn’t call it an upgrade really. Sure the tvs are about 80 bucks more expensive but that doesn’t really mean better. I get a slightly darker and grittier sound out of the high sensitives. They seem a little more angry. The tv seem to offer more chime and clarity. I think tv classics are too tame for my taste. A classic plus in the bridge is phenomenal. The ray butts are nice.

I think the difference is the older Gretsch filtertrons used ceramic magnets and the high sensitives use alnico. I could be wrong in that but I think I remember reading that. It’s been a while.

I have 2 Falcons with HS FilterTrons.
They sound great & wouldn’t swap them out..
I had a 5420 with TV Jones Classics which sounded great but for me not nearly as good as HS FilterTrons.

I’d like to try some TV Jones Ray Butts though as from what I’ve heard they’re pretty awesome..

I love HS FilterTrons. I remember when they were the norm and TV Jones was the exception on stock models.

I'll just echo what others have said, HS FT are great pick ups and TVJ are just a different sounding pick up, I will say that i think you can hear the difference in price though as the TVJ offerings are what i would say more refined i guess, but that might not be the sound you want though.

As for whats standard these days, well it would seem thay all of the VS models have TVJ and the players editions have HSFT, but the VS models do comand a higher price tag though, kinda like the high end of the prolines.

OK, I never had TVJ to compare except those on the G5125 Corvette G-Love of my daughter, who is Right-Handed, but I can attest that Gretsch HS FT are great and good pickups ! 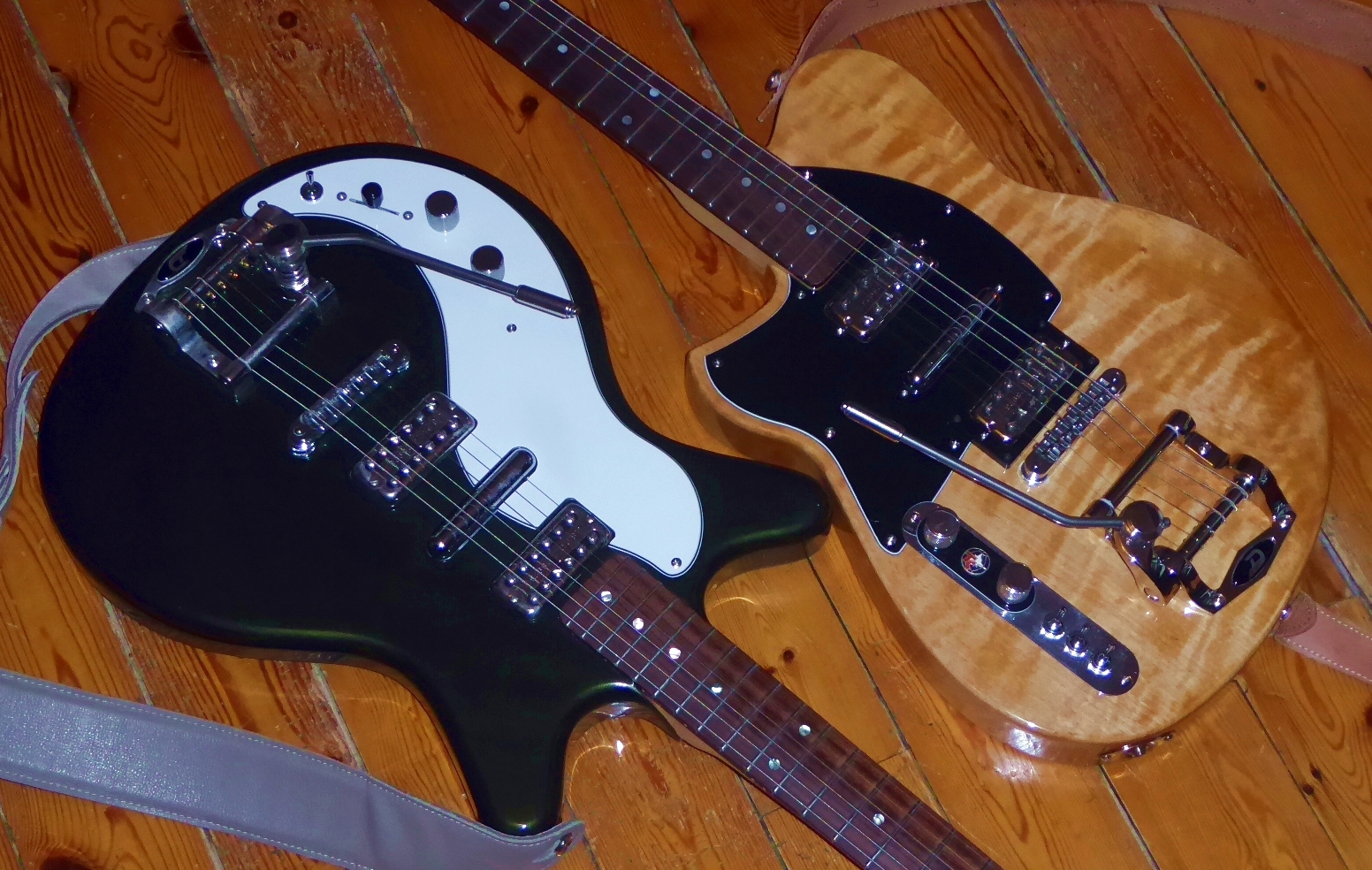 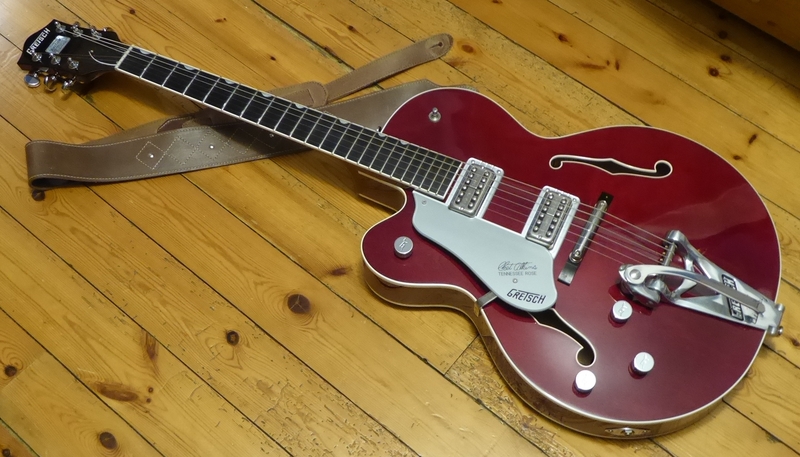 HS are a bit more powerful and Gretschie to my ear. The TV Jones have a little more 3D action to them. I have and appreciated both options. I personally would not "upgrade" a guitar equipped with HS pups. (not unless I was trying to take the guitar in a different direction for some reason.)

My Annie had HS Filter’Trons. I removed them in favor or TVJ Ray Butts pickups for clarity and to brighten things up. It was a good move for me. I didn’t hear much difference with a pick but the timbre from my finger style was improved. I still want more higher order harmonic complexity. I’m hoping that a Compton chambered titanium bridge gets me across the line. It’s a lot of money in pursuit of perfection but it’s not about the money, at least for me.

I removed the 490 R and T pickups from my Gibson SG and replaced them with TVJ Classic and Classic Plus pickups in drop in humbucker mounts. They’re perfect for my solid body, bright, clear, and powerful with great balance between the neck and bridge.

Both are “better” than what had been in my guitars. Both were expensive sets. Both were well worth it to me but I completely understand that what was in these guitars may have been perfect for someone else. I also understand that someone who doesn’t have $700 to drop on pickups, just because, may not think they’re worth it. I’m far enough past both upgrades that this isn’t honeymoon talk. It’s my personal reality.

It’s Thanksgiving today. I have a lot to be thankful for.
Last edited: Thursday at 10:33 PM

I like to buy FSR Limited Edition Gretsch guitars, quite often from Streetsounds NYC. All 8 of them came with HS Filtertrons as standard. Now I don't mind HS Filters but I don't want the same pickups in every guitar and I prefer the tone and clarity of TV Jones. I replaced them with a mix of TVJ Classic/Classic+, Setzer Signatures, Duo-Trons, T-Armonds in Filter mounts, and as soon as I can afford it some Ray Butts will be added to at least one more of them.
M

I have yet to try out a guitar equipped with the butts pickups. However, every YouTube demo I have heard their clarity and overall sonic texture seems to me to be a cut above the rest. At least when it comes to clean tones. I would imagine they are the ultimate filtertrons when it comes to Chet finger style. I’m curious how they might sound with high gain since they are not wax potted?

Just out of curiosity and comparisons, has anyone ever played an axe with those mojo tron filtertrons? Thoughts?

Are the classic+ or the setzers hotter and do they still sound Gretschy?

As far as I’m concerned Gretsch HS pickups offer true Gretsch sound.
Other makes(and there are a lot) offer the variety our modern tone palate demands and requires, as in more output, calibrated sets, a bit thicker here, a bit thinner there, more of this and that. All good.

Chmason85 said:
Are the classic+ or the setzers hotter and do they still sound Gretschy?
Click to expand...

The Classic+ is hotter and makes a great bridge pickup. The Setzer Sigs are not hotter but I like the scooped low-mids for extra clarity. The Setzers have a smoother high-end with less harshness than the HS Filters to my ears.
M

If you are looking for hotter filtertrons I would suggest the powertrons from tv jones. I have had two guitars with them and clean tones sound very Gretschy but when overdriven they have the power of paf humbuckers but slightly more defined and clearer sounding when it comes to individual notes. I love the powertrons. In fact they are my go to filtertrons as they sound like vintage filtertron but at the same time are great for all styles of gainer modern rock!

Chmason85 said:
Are the classic+ or the setzers hotter and do they still sound Gretschy?
Click to expand...

I can answer for Classic Plus. It’s hot enough to balance well with a TVJ Classic in the neck position. It’s a good choice with treble bleed. You don’t have to worry that it will darken with the volume rolled down. Classic and Classic Plus are ideal in my SG. I’m not sure I’d like the Plus as much without treble bleed. You need to think about volume pots and how they’re wired and also about how tone is controlled on your guitar when choosing pickups. None of that is easy or intuitive, especially with a Gretsch, even more so if it has a mud switch.
Last edited: Thursday at 11:43 PM

I’m an HS Filtertron fan. I had a set of them in my White Falcon. I replaced the neck pickup with a TVJ T-Armond for the stark, spooky Duane Eddy boom-twang. I kept the HS bridge pickup because it needs no replacing. It sounds awesome. 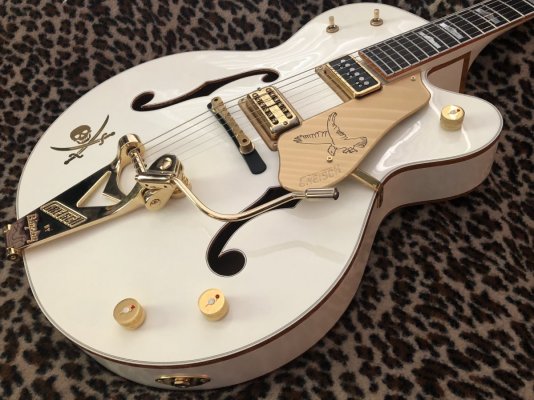 I’ve had TV Classics and a few TV Classic/Classic+ combos. The Classic+ is a little higher output, but it also has a heavy mid-range thing going on. I found it to get pretty naselly, especially when played clean.

The TV Jones Ray Butts are a different animal all together. Low output, no wax potting, and built to Ray Butts’ original specs from his original notes. They are incredibly clear and balanced, but they REALLY come to life with a boost or drive pedal. When they are used with the amp at the “edge-of-breakup” setting, they sound unlike anything else. Also, in the middle position with the RB’s, there’s none-more-Gretchier.

Mikethomas said:
If you are looking for hotter filtertrons I would suggest the powertrons from tv jones. I have had two guitars with them and clean tones sound very Gretschy but when overdriven they have the power of paf humbuckers but slightly more defined and clearer sounding when it comes to individual notes. I love the powertrons. In fact they are my go to filtertrons as they sound like vintage filtertron but at the same time are great for all styles of gainer modern rock!
Click to expand...

I agree for the most part. I have powertrons as well as HS Filters, and the Powertrons are definitely darker (certainly not Gibson-ish dark though). However, the natural compression of the powertrons makes them my first choice for modern rock sounds… just a great sounding pickup, and very responsive to pick dynamics. Some people don’t appreciate the extra warmth, though… especially those who do a lot of Chet picking.

You’re going to get all sorts of different opinions on this subject. Since you own guitars with TV Jones Classics pickups, you know what they sound like. In my experience, Gretsch HS filters don’t do anything the TV Jones can’t. Whereas, TV Classics, and especially the Classic +, are much better for rock tones than stock Gretsch filters.

As for the reasons why Gretsch uses their own filters in some guitars, it probabaly has more to do with cost that anything.. Fender /Gretsch buying pickups from TV Jones means they have to pass on that additional cost to the customer. I don’t think TV Jones being a small independent operator has anything to do with it and getting a contract from a large manufacturer like FMIC who will buy your products consistently is what every small independent dreams of having.

The HS Filters came in my Penguin. I would not call TVJ an upgrade in this case although tonally they do differ certainly one isn’t better than the other. I would say it comes down to your ear which set is more you which do you prefer.
You must log in or register to reply here.
Share:
Reddit Pinterest Tumblr WhatsApp Email Share Link