These amps are really common with collegiate jazz bands. Unfortunately, even tho the cabinets are reinforced with metal L channel they break easily. On stage, every one I've ever seen has had the wood shattered. If it's a personal amp, I'd expect it to be better cared for than one used by a bunch of college kids, after being thrown into the back of vans for gigs.
They are "clean machines", and that chorus is well renowned and respected. I've got an old Roland EP, and it's a great piece of gear, like all Roland products.

Just a heads up: I owned a Fender Mustang GT100 and always felt like it lacked real amp feel when playing it loud. It just felt like a computer sim of the amps it was modeling. The amp models sound good…at low volumes. It is a great studio tool with all the amps and effects, but if playing loud with a band is a concern then I’d go for the Katana. I emailed Fender when the GTX was announced and asked them what exactly changed from the GT and their answers were not inspiring me to pick up a GTX. I assume if they had maybe doubled the RAM or upgraded the processors that it would most likely eat into the Tonemaster sales. At any rate, the app on the tablet or phone is convenient. For the best sound & amp feel the Katana wins it every time. Just my opinion.

Mandojoe said:
Thanks all, going to play fender Gtx100 and kat 100 head to head but fender includes footswitch/looper so much cheaper in total and concensus is it sounds better and as/more?
Click to expand...

Big fan of he Roland Blues Cube. I have the Stage (65 watts max) model. Cleans all day long, but, best part is the built in attenuator..goes down to .5 watts, which may or may not a feature useful for you, but for house playing very useful.

I haven't read the first 2 pages, so if it has already been mentioned, forgive. My Vox VT40X hybrid amplifier has 2 modeled amplifiers that deliver very nice clean tones. They are, in order, "User-A", and Vox AC30TB. The User-A setting, which is user-modifiable, by default from the factory, corresponds to a Dumble Clean Amp.

NJDevil said:
I got my Roland Blues Cube Artist last June and love it. Great clean tone, great for gigs and there are 2 choices: 1 speaker 80W and dual speaker 85W. Great for gigs and the built in attenuator perfectly captures the tones you loved really loud with the dial at .5W that is just for you........ options are .5W, 15W, 45W, 80W.

The Clean Tone Capsule really makes what is great sound even better. This showcases it really well:

Skunk is a baaaad mammajammah

Personally I'd go for a valve/tube amp and it would probably be a Fender or similar. 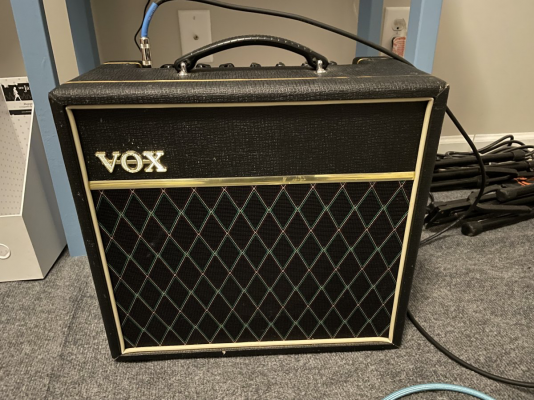 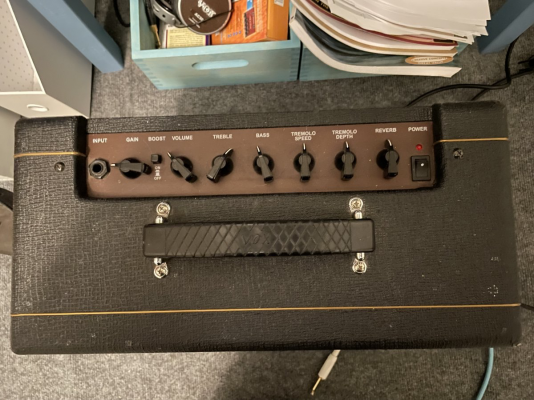 If it's clean you are looking for, my experience has the Pathfinder 15SMR and the new Tone Master series pretty much tied. It would only be the power out that would break the tie.

Papa Dafoe said:
I love my PR, and the clean is absolutely outstanding at home volume levels. If this is going to be played live with a full band, it may not be a great choice though. Once the volume gets past noon the tone gets gritty. Gets gritty in the best possible way, but nevertheless, it stops being clean.
Click to expand...

Fender Mustang GTX
Does it all

I am late to party but this is a nice lil amp , its my night timer as it has head phone jack for when better half goes to bed.
Came with a cigarette lighter power cord ,daisy chain and has a aux input and carry bag.
Takes pedals well 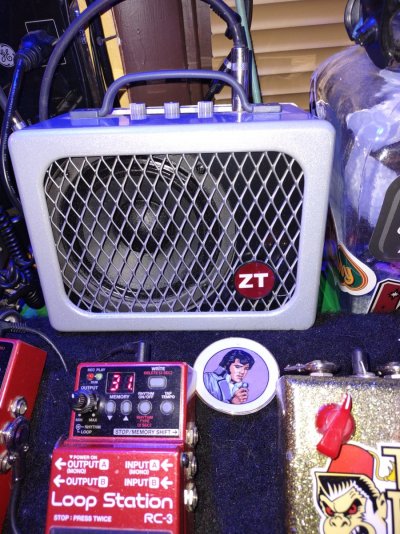 I've had a number of these and I modded one with a 20 watt chip (blew up the original 15 watter). I used an external cabinet with a 12" .speaker

Best choice in my humble opinion is a Fender Blues Jr. IV. Even though 15 watts - these little puppies are loud (if you need it). Beautiful cleans and when adding dirt through gain or the fat switch a little roll-off on the guitar's volume knob and it cleans right up beautifully. I use the limited edition on with a Cannabis Rex speaker but the stock Fender speaker is great as well, the Cannabis Rex does throw a lot more air and has a very deep and smooth bottom end. Terrific amp. There's a reason why you always find them in back lines.
F

I just got a Vox MV50 AC. This is the mini version of the Vox AC30 using . It has headphone outputs or you can go to a speaker ( 50 watts = plenty loud) or it has line outputs for recording or to go to the house system at a gig. It sounds SWEET! You can crank up its gain for some crunch, and use pedals. And it's cheap! (Around $200.) This is the future, man. No more tubes to worry about. And it only weighs 1 pound.

I've been using it for recording and couldn't be happier. Thank goodness I found this before I bought an AC30 head and tried to find room for it. 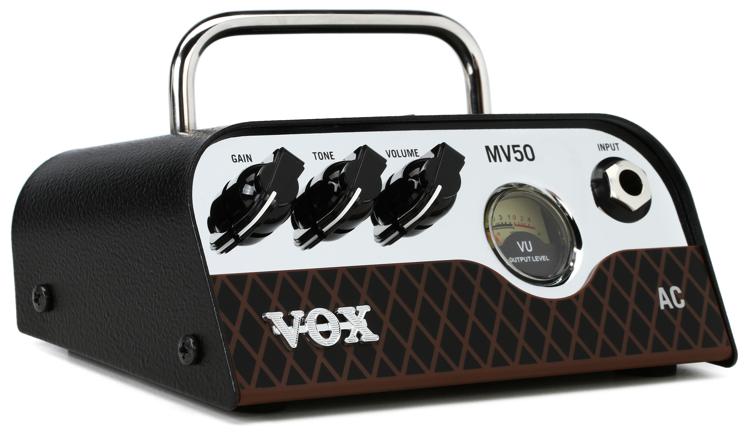 This thread's been going for over a month so I'm guessing the OP made a decision. But I'll waste my time by adding my experience.

It does seem really hard to get non-tube amps to sound really good in a bedroom. I love the HX Stomp with headphones, but haven't found a good speaker to play it through for my tastes.

I have a Fender Princeton Reverb RI with 12" Jensen P12Q (replaced the original Cannibis Rex, and it completely opened up a dull amp!). Those are my favorite clean tones, and I chose that amp over a Blues Jr. and Deluxe Reverb, which both sounded harsh and in-your-face, compared to the Princeton's mellow but clear and sweet sounds.

When I wanted a Vox sounding amp, I went to the local store and played a Boss Nextone Stage and Artist. Great sounds. There was an AC15 sitting next to them. I plugged in and was instantly blown away! Wow! Nothing wrong with the Nextone sound, but that Vox was just a whole different animal. Solid state amps seem very directional, and only sound good when they're pointed at you. Tube amps sort of fill the room with a 3D sound, even though they're mono (one speaker amps anyway). I don't understand the physics, only what I hear/feel.

Since the AC15 was too big and loud for my use, I got an AC10C1-VS with the upgraded speaker. I still think I'll change the speaker but I love the amp, especially when running it into a load box for recording direct. The fact that it sound that much better through headphones makes me think the original speaker might be holding it back.

Then I got a Quilter Aviator Cub (Fender version, they just released a UK version). Best solid state amp (or most tube-like solid state amp) I have played. I love the features and the tones, and the three inputs for Tweed, Blonde, Blackface are all different enough from each other, and all useful for different things. The Aviator Cub is also the best sounding speaker I've run my HX Stomp into (effects return, bypassing preamp), including an FRFR that I sold. And the overdrive and reverb sound great to my taste. It's a great little amp with no tubes.

I tried a Roland JC-40 and Blackstar ID-100, and got rid of both of them fairly quickly. I also had three different Yamaha THR variants and I did like them, but the big limitation is the 3-inch speakers and metal toaster cab. I did try plugging the THR-30II into studio monitors with 6.5 inch speakers and it only helped a little. When I play at home just for fun and for the tones coming back to me, I go to the Princeton Reverb, the AC-10, and the Aviator Cub.
D

I have Katana 50 MkII. It has variable wattage so can do apartment and gig volume.
If you want an FX loop and line out you need the 100W. The 50 has phones/rec out, which mutes the amp speaker.
I use it on the clean channel with pedals and it sounds great and records well with mics. I don't care for the built-in FX, especially the distortions. But it's a good price for a 50W amp even without FX.
But I've found it absolutely necessary to use the built-in parametric EQ, especially if using distortion. This requires connecting to a computer or phone via USB to access Tone Studio to use the EQ.

ZackyDog said:
I'm partial to tube amps like this one:

It doesn't get much better than a Celestion Blue speaker in a Vox AC-15! Nice amp! And super versatile - beautiful clean tones and really cool breakup.
N

I've got a DV Mark little jazz, but now I just use my Roland Micro Cube when I practice. I do find the lack of EQ knobs hard to work with. I'll likely sell the DV Mark and get a Yamaha THR10 or Positive Grid Spark.

Mandojoe said:
Thanks all. I have a great Fisher acoustic amp. Are you suggesting I could use that for my Gretch dspellman ?? That’d save some $ and let me keep my Colling D1A ampd and keep a voice mic outlet. Because I was figuring I’d have to sell the fishman to afford an amp for the gretsch.
Would love to get a JC 22 or JC 40, but can’t seem to find a used one in my budget. I may have to go for a katana 50 mark two.
Any comments on katana 50 versus JC 22 or 40? Great cleans at good price is my goal.
I do have a line on a katana artist incl gafc switch, more amp than I need but price is so good and gets me an acoustic outlet and looper effects capability… Should I wait for a jc to come available??
Click to expand...

I have a Kat 50, and had a vintage JC-120 until recently. The “Clean” setting on the Kat is Fender clean, and the “Acoustic” setting is JC clean. The effects on the Kat really require a PC to tap into their full potential, but you can dial up decent cleans with a bit of reverb using just the knobs. I occasionally use the “Crunch” setting, but I don’t use the higher-gain settings at all. I use the power settings a lot though - just bump up to the next power level and turn down the volume to get loads of clean quiet headroom. I use the Clean setting most.
Last edited: May 12, 2022
You must log in or register to reply here.
Share:
Reddit Pinterest Tumblr WhatsApp Email Share Link