I ran into a guy today. He told me he was given a Gretsch by someone for work. Like instead of money. He said it was a white one. So I asked if it was a White Falcon. He said it was. So he showed it to me. I had to break the bad news to him. It was a fake. 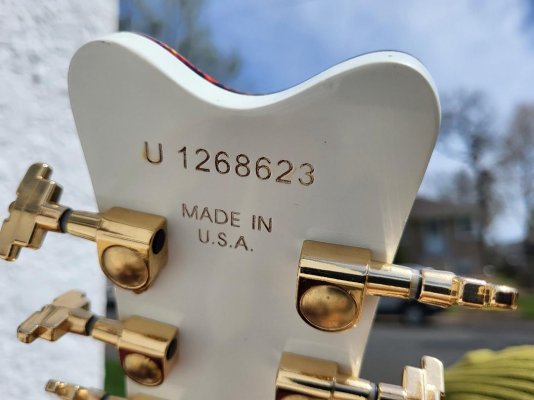 The serial number is a good one, from 1966 according to the decoder. But obviously not a 1966. 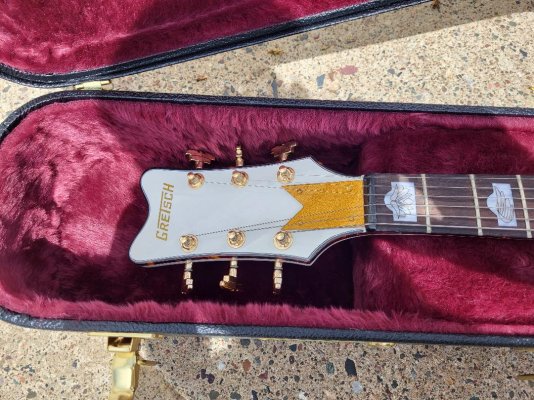 A little hard to pick up in this pic, but the slant on the "h" is wrong. and a hacked up job on the nut. 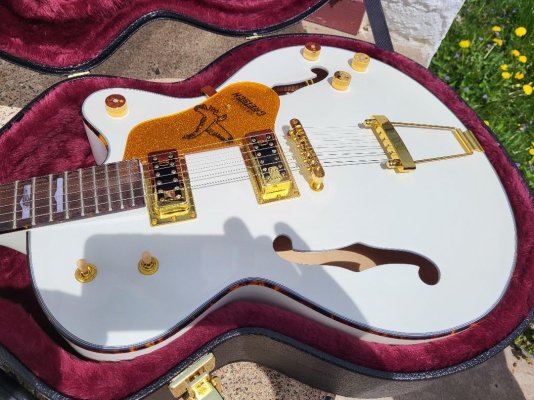 This pic really shows the problems. He did suspect it wasn't real. Let the buyer beware.

Shock said:
He told me he was given a Gretsch by someone for work. Like instead of money.
Click to expand...

Wow , so sorry for your friend .

The gold finish looks pretty nasty and the fretboard binding and the f-hole edging. The case looks like the best thing about it. Sorry for your friend.

I always wonder who is actually buying guitars like that.
For the sake of playing it you could get a working Ibanez at this pricepoint and be happy.

If you originally wanted to show-off with a luxury instrument and buy something like that for cheap, everybody and his grandma would instantly notice that it is not the real thing and would laugh at you. Noone would be impressed by it.

Some of that binding work is a **** show.
Especially how it hangs off the headstock like that.

Can be a good project guitar as a base for modding perhaps?
I’d start with etching the Gretsch logo off that headstock to save your friend from further embarrassment…

That's sad. Maybe the guy that gave it to your friend didn't know either. Just saying ... it ain't likely, but maybe.

Did this just happen? Or is it something he's already had for years? If the dude's honest they should try to work something out. The guitar's not what he claimed it was - not even close. It's basically like passing counterfeit money.

Not a good thing.

Highroller said:
That's sad. Maybe the guy that gave it to your friend didn't know either. Just saying ... it ain't likely, but maybe.

Did this just happen? Or is it something he's already had for years? If the dude's honest they should try to work something out. The guitar's not what he claimed it was - not even close. It's basically like passing counterfeit money.

Not sure exactly when the deal went down. Probably a year ago. I was working on a house across the street from him yesterday, and at the end of the day he came out to ask me some questions when I was packing out for the weekend. So I had time and was feeling chatty. He has an art show in his yard every year and has bands over. So I mentioned I would play his show in the yard. So we talked about guitars a bit. He said he has one, and he would show it to me. I told him if he had a White Falcon I would buy it from him if he didn't know what to do with it.

So the back story is he knows where the guy lives, and says the guy has a rummage sale every year. Its going to be in June. That is where he saw this guitar at. So I am not sure what kind of sketch deal transpired. I pointed out the incorrect pickups, the lack of binding on the F holes, the jacked up serial number, Falcons weren't made in the US when this one was built, the AB-1 bridge, etc. So I didn't ask him a lot, just let him talk.

So in all honesty, I don't know the guy, other than just meeting him. But he seemed to be straight with me. He was like, "oh well..." about it. But I live in the big city. We have a lot of evildoers. For all I know, the guy could have a basement full of Chibsons and Gretschinas. Because you see the cheap trapeze, there was a real Gretsch trapeze in the case. I didn't think much about it until now. Hmmm. Why would a guy have a real Gretsch trapeze in a case with a Gretschina?
You must log in or register to reply here.
Share:
Reddit Pinterest Tumblr WhatsApp Email Share Link