Anyone tried the new 5260 baritones?

TV the Wired Turtle said:
a bolt on neck is a hard no for me, thats not gretsch. more bang for the buck IMO can be found here for $400
View attachment 180204
Click to expand...

I didn’t even think a Gretsch would be made with a bolt on neck!

I had thought about the squirrel bass vi, but that bridge/vibrato is not even close to my favorite..

for the munny I may have to go for a Danny’Lectro.

I have a question: what's the difference between a Baritone Jet and an Electromatic Jet, size-wise? It's only the lenght (and the size, I suppose) of the neck or do the body shape/thickness changes as well?

TV the Wired Turtle said:
a bolt on neck is a hard no for me, thats not gretsch. more bang for the buck IMO can be found here for $400
View attachment 180204
Click to expand...

The Squier Bass VI is great, and I love the strangle switch, but factor in the cost of a new nut and bridge, in my opinion. The plastic nut on mine was quickly ravaged by the heavy strings, especially with use of the vibrato. The stock bridge on mine also wouldn't intonate the low E. A staytrem bridge solved that, and gave it a lot more crisp punch, but at a cost of $100+.
D

That's exactly what you should do: turn it into a bass VI with heavier strings.
I got the London Grey G5260 with no vibrato bar last year. The build was good: minimal fret buzz and great intonation. The stock 72-14 strings are much too heavy for B-b tuning at 29.75", way too much tension. I tuned it AEADGC with 63-13. It's just too long (29.75") to be played like a guitar. And the pickups were terrible. Neck super muddy and neither sounded good with distortion. They had a strange plasticky sound. I wanted to put Seymour Duncans in it but would have had to make the cavities bigger, and I just couldn't live with the scale length. I already have a Gretsch short scale bass so I didn't want to make it a bass VI. But with the scale length, that's what it would be good for. And would greatly benefit from some TV Jones pickups.
I sold it for a $100 loss and got a LTD Viper 201B 27" 6 string baritone. This is the size a baritone guitar should be.

Andy Fortune said:
I'm thinking of getting one of these and tuning it down to E-e with heavier strings. I didn't like the original black sparkle ones with the Bigsby because the tension bar Bigsby was just a poor functional match, in my opinion. I'd go with a stoptail version and then decide if I wanted to mount my own vibrato (probably a Les Trem). Have they improved on the design?
Click to expand...

I enjoy my baritones- I have both; got the black sparkly one when it was the only option, and got a hard tail when I had the opportunity, because I don't find myself ever using the Bigsby. One thing I'd like to find are flat wound strings for it though- no luck yet. I find the longer scale length feels good for me because I have big hands. I love the atmospheric tone the baritones have and I find that fingerpicking works better for me than chording. ENjoy yours.

Virginia, the state, not the woman

I have gone back and forth with baritones and bass vi. I had the Eastwood bass vi. It was a really cool instrument that could be a used as a bass in a pinch, and also to create new and interesting accompanying music to a regular 6 string. Easy to play. had a Alvarez baritone when they first came out. Tuned B to B. Once i got past having to relearn songs in different keys, its a great addition to a standard 6 string, or 12. Sold both. I recently got a Tacoma Thunderhawk baritone. Same scale length, but the acoutic sound is tremendous. The light weight body really projects the sound, where as the Alvarez could be heard unplugged, but lost in a crowd, this one will dominate. I enjoy adding it to some of the songs we do as it changes things around. I also like hearing the songs we do in a lower register, or different key. Not sure if i would play an entire gig with it as it easily get s into the bass range if your not careful, but for a bass less band that works at times.

I tune it A to A, with 70 to 16 strings. The 70 wont tune down to a E without flopping, and some of the pother strings would have issue as well if i tuned it E to E. I cant imagine using a 95 like the Eastwood did. It would not fit in the peg slot or the tuner, and i think it would be too thick to play like a actual guitar. I use the baritone for leads, and i still have to be careful not to pluck the low A too hard as it will fret out. I dont think the low E 95 even in the right scale could be played like a standard gauge would be, if that makes sense, So i gave up on a “octave” guitar tuned E to E and deal with this.

I’d just like to give a bit of advice to anybody looking to get one of these: Don’t spend the extra for the Bigsby version. Get a Duesenberg Les Trem II instead. Not only does it make it easier to find strings that are long enough (Daddario EXL158 .013-.062s are excellent on this guitar for B to b), but it is so much smoother and easier to use than the tension bar Bigsby. I just put one on mine and it is A+++. 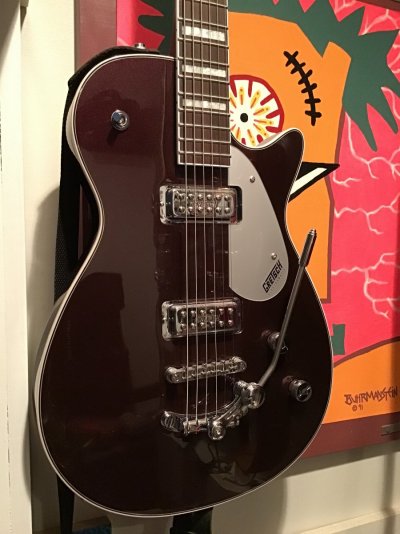 I own a 5260 hardtail as well as Vintage Modified Bass VI . I have the Gretsch baritone tuned A to A & the Bass VI E to E. Both are verry different in sound,but the low end on the Gretsch sounds fantastic. To me a bit like the low tones on a Grand Piano verry full with massive sustain with a bit reverb really impressive. A tip to those who want to use Gretsch as a Bass VI is to string 'm with La Bella flat wounds. The give a verry nice sound tuned E to E. As for the bigsby on a baritone, totally useless I'd say,but "different folks for different strokes" I also never use the tremolo on my Bass VI. And for those of you who are considering the Squier be prepared to change the bridge to a staytrem or turn it around 180 degrees so you can almost intonate the low E normal (mind you... almost) The Gretsch however came perfectly intonated and set up out of the Box as I'm used to from the Gretsch QC !!!

TV the Wired Turtle said:
a bolt on neck is a hard no for me,
Click to expand...

A bolt on neck immediately disqualifies the guitar from consideration. It’s set neck or nothing at all.

BCRatRod73 said:
A bolt on neck immediately disqualifies the guitar from consideration. It’s set neck or nothing at all.
Click to expand...

I love my two set neck duo jets. I also love my bolt on neck Telecaster. I also love this bolt on neck 5260 baritone. Other than my acoustic, that’s all my guitars. I keep what works for me, and it’s taken a while to find these keepers. All are well-built, great-playing, great-sounding guitars. It would have been a shame to disqualify two of them out of hand because they are not set neck guitars.

Andy Fortune said:
I love my two set neck duo jets. I also love my bolt on neck Telecaster. I also love this bolt on neck 5260 baritone. Other than my acoustic, that’s all my guitars. I keep what works for me, and it’s taken a while to find these keepers. All are well-built, great-playing, great-sounding guitars. It would have been a shame to disqualify two of them out of hand because they are not set neck guitars.
Click to expand...

I started out with bolt-on guitars. Nothing wrong with them per se. So much great music has been made using them and plenty of really great players have used them and continue to use them. The single coils of a Strat or that Tele sound are great for a lot of things. For me it comes down to perception of craftsmanship. I’d guess a chimp could probably be trained to attach the neck. Bolt-on guitars just seem cheap to me. Leo had a great design for building times as well as ease of repair. But the squared off block of wood the neck connects to just ends abruptly. It’s not aesthetically pleasing and the body doesn’t flow into the neck. Some manufacturers have designed a better bolt-on joint that looks much better. If Fender and the others that copied the squared off block would add a little end cap to mimic a set neck it would make the design flow better and be more aesthetically pleasing. I appreciate a good design. Leo’s design is utilitarian for good reason. Just my opinion. I did watch the Fender factory tour and came away with more respect for the process, but I do not like the neck joint.
Also, most guitars with bolt-on necks are of the “normal” size. At 6’-6” I make the “normal” sized guitars look tiny, thus the full size hollow bodies and full size semi-hollows I play.
On my tone quest I’ve found what works for me. No ill will to anyone who makes music with their preferred instrument, no matter the design of the neck joint.

I wonder if the pickup routing would allow for the TV Jones block kit to be used to fit proper Filter’Tron pickups in there? Looks very similar to the older Pro Jets.
Very tempting I must say.
https://tvjones.com/pre-2012-pro-jet-replacement/
Last edited: May 29, 2022

rockinforJesus said:
I wonder if the pickup routing would allow for the TV Jones block kit to be used to fit proper Filter’Tron pickups in there? Looks very similar to the older Pro Jets.
Very tempting I must say.
https://tvjones.com/pre-2012-pro-jet-replacement/
Click to expand...

yeah, i’m betting mini hums routing is almost the same size as ft’s routs. curious to see if any wood would need to be removed.

mister rain said:
yeah, i’m betting mini hums routing is almost the same size as ft’s routs. curious to see if any wood would need to be removed.
Click to expand...

I installed filters in my 2008 Pro Jet and used the TV block kit. Earlier years had slightly different routing but still fit the same mini humbuckers. 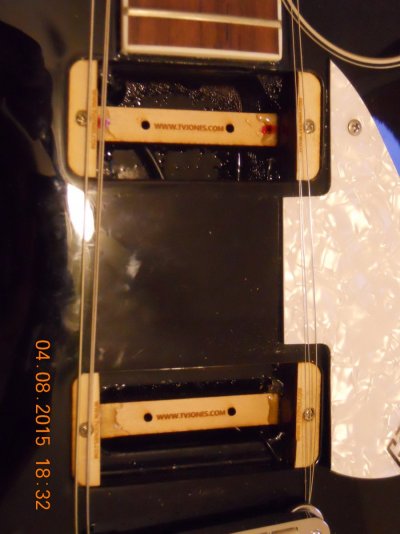 good to know. i’m not hurting for a 30” gretsch, but it wouldn’t hurt to have a back up. and those mini hums ain’t gonna do it for me…
You must log in or register to reply here.
Share:
Reddit Pinterest Tumblr WhatsApp Email Share Link